Pro- and anti-inflammatory cytokines play a central role in autoimmunity and inflammatory and infectious diseases. They are also key players in metabolic disorders and oncology, particularly the anti-tumor immune response. Homogeneous Time Resolved Fluorescence (HTRF) from Cisbio Bioassays provides a versatile platform for the quantitation of various cytokines and chemokines. HTRF is perfectly suited to monitoring cytokine and chemokine release in cell-based experiments, especially physiological models such as peripheral blood mononuclear cells (PBMC). Typically, the modulation of cytokine release relies on the use of pharmacological compounds either to induce or inhibit their secretion. To gain further insight into the mechanism of action of such drugs, it is necessary to carefully analyze their effects, particularly the effect on cell viability.

This application note demonstrates how to perform a relevant analysis of cytokine secretion along with cell viability, using the SpectraMax i3x® Multi-Mode Microplate Reader with SpectraMax® Minimax® 300 Imaging Cytometer. This allows users to measure HTRF and cell viability on a well-by-well or cell-by-cell basis, as well as confirming assay quality by monitoring cells’ appearance. We describe (i) how to induce cytokine secretion from treated PBMC, (ii) how to measure cytokines with HTRF, (iii) how to evaluate viability of PBMC using the EarlyTox™ Cell Integrity Kit from Molecular Devices, and (iv) how to normalize cytokine concentration to PBMC viability.

Frozen human PBMC were thawed and seeded at 50,000 and 100,000 cells per well in a 96-well, black-wall, clear-bottom microplate in 200 µL of RPMI + 10% fetal calf serum (FCS). Prior to cell treatment, PBMC seeding was monitored by imaging with the MiniMax cytometer using the transmitted light channel.

After an overnight incubation, 16 µL of supernatant from each well was transferred to a 384-well, low-volume microplate (Greiner #784075) to perform HTRF cytokine assays. Briefly, each sample was used neat or diluted 1:10 or 1:20 to work within the linear range of each assay. Cytokine concentrations were interpolated from the corresponding standard curve, consisting of standards diluted in RPMI + 10% FCS (HTRF cytokine kits: 62HIFNGPEG, 62HIL02PEG, 62HIL1BPEG, 62HIL06PEG, 62HIL08PEG, 62HTNFAPEG).

The SpectraMax i3x reader was used to read HTRF cytokine assays with a preconfigured protocol in SoftMax® Pro Software.

To view the complete workflow of how to normalize HTRF cytokine assays to cell viability, please visit moleculardevices.com/ htrf-workflow

Control of PBMC seeding prior to cell treatments

Prior to cell treatment, human PBMC were imaged in the transmitted light channel to confirm proper seeding. These cells have a diameter of less than 6 µm and as a result can be difficult to count individually in a transmitted light image. Therefore, we implemented a user-defined custom analysis to calculate cell density as a percent of covered area per image. This analysis calculated 19.7% covered area representing 50,000 PBMC per well and 35.9% covered area for 100,000 cells per wells, which corresponds to a ratio of 1.82 (data not shown). These results confirm that this new custom data analysis successfully identified objects in field analysis and enabled an accurate percentage area coverage per well.

As expected, LPS efficiently induced the secretion of IL1β, IL6, IL8 and TNFα (Figure 1) while co-stimulation with 5 ng/mL PMA + 1 µg/mL ionomycin induced a maximal release of IL2 and IFNγ.

Interestingly, both IL2 and IFNγ secretion were significantly decreased in the presence of 2 µg/mL of ionomycin (data not shown).

Dexamethasone caused a significant decrease in cytokine release induced by either LPS or PMA/ionomycin treatments (Figure 2).

Figure 2. Effect of dexamethasone on cytokine secretion. Dose-response curves for TNFα, IL2 and IFNγ not shown.

The EarlyTox data analysis relied on cell count using the red channel (size and fluorescence intensity threshold) and on identification of live and dead cell populations. Using the Classification feature in SoftMax Pro Software, cells with nuclei labeled red only were classified as live, and cells with nuclei labeled both red and green were classified as dead. Identified objects were visualized in the software by red (live) and blue (dead) masks (Figures 3 and 4).

LPS + dexamethasone treatment did not cause any noticeable effects either on cell viability or cell morphology compared to untreated cells (Figure 3). PMA and ionomycin stimulation treatment induced formation of cell clusters and 10-13% dead cells (Figure 4 and Table 1).

To gain further insight into PMA/ionomycin effects on cell viability and morphology, PBMC were treated with increasing doses of PMA and ionomycin separately. The same methodology as previously described was applied (images not shown). As reported in Figure 5, cell death significantly increased with increasing concentrations of the two compounds, indicating that both drugs mediate cytotoxicity. Moreover, our data showed that PMA is almost 2 times more cytotoxic than ionomycin (15% dead cells with 50 ng/mL PMA compared to 7% of dead cells at 2 µg/mL ionomycin).

Figure 5. Cytotoxic effect of PMA and ionomycin when added separately.

Integration of PBMC viability with cytokine secretion data represents the last stage of an accurate analysis of the biological response. To perform the normalization, the concentration of cytokine previously determined by HTRF was divided by the number of living cells, determined by the EarlyTox Cell Integrity Assay.

In Figure 6, the concentration of cytokine was expressed per number of living cells, and the pharmacological window and IC50 were reported in Table 2. As expected, since dexamethasone did not induce any significant cytotoxic effect, the pharmacological results were comparable before and after normalization.

Figure 6. Effect of dexamethasone on normalized cytokine secretion. Dose-response curves for TNFα, IL2, and IFNγ are not shown.

However, normalizing PMA/ionomycinstimulated IL2 or IFNγ secretion to cell viability values revealed a concentrationdependent effect of PMA (Figure 7) that was not previously detected. This highlights that the normalization of cytokine secretion (or other biomarkers) to the number of live cells can reveal relevant biological responses. 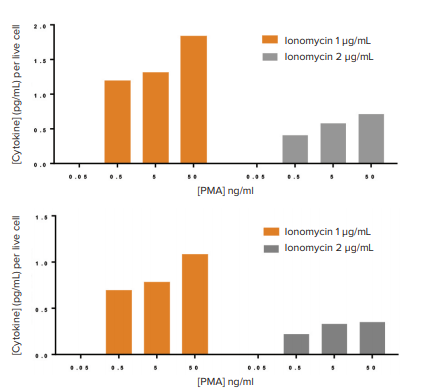 This work clearly establishes the cytotoxic effect of PMA and ionomycin, in contrast to dexamethasone, which does not induce any noticeable cytotoxicity. Cell viability results obtained with the EarlyTox Cell Integrity Kit show a visible concentrationresponse effect of PMA or ionomycin.

Cisbio Bioassays offers an easy-to-use and sensitive method for evaluating cytokine secretion and determining the cytotoxic effect of drugs on cytokine release from suspension cells such as PBMCs. The combined capabilities of the SpectraMax i3x reader and MiniMax cytometer enable HTRF cytokine quantitation and cell viability assessment using the EarlyTox Cell Integrity Kit.