COVID-19 RESPONSE - We are committed to supporting our scientific community during this pandemic. Learn more

This application note provides a preliminary protocol and performance study of a bovine transferrin assay using a commercially available anti-bovine transferrin antibody. The note is intended as a guide and does not represent a validation of this assay, nor does it necessarily describe the optimal performance parameters.

Note: The Assay Buffer Concentrate included in the ILA kit is not used at any time in the contaminant human transferrin assay.

The sheep anti-bovine transferrin antibody was labeled as described in the ILA section of the Threshold System Operator's Manual and the ILA application note Optimizing the labeling of proteins.

The sheep anti-bovine transferrin antibody is supplied in phosphate buffer containing preservatives. Therefore the antibody was dialyzed against PBS (10 mM Phosphate, 150 mM NaCl, pH 7.0) prior to labeling. DNP-biotin-NHS and fluorescein-NHS haptens were separately incubated with 250 µg of antibody, for two hours at room temperature, protected from the light. The molar coupling ratio (MCR) is defined as the number of moles of biotin or fluorescein incubated per mole of protein. The MCR used was 20:1 for the fluorescein and 30:1 for the biotin.

The unreacted hapten was separated from the antibody by passing the reaction mixture over a Pharmacia PD-10 column which had been equilibrated with 25 mL of PBS. The protein concentration, the protein recovery and the molar incorporation ratio (MIR) were calculated as described in the ILA section of the Threshold System Operator's Manual. The MIR is defined as the average number of moles of hapten covalently bound per mole of protein. Table 2 shows the molar incorporation ratios obtained for three independent labeling reactions. The stock concentration of the antibody was approximately 1 mg/mL.

After labeling, the antibodies were diluted to 20 µg/mL in BSA-free Assay Buffer with 1 mg/mL ovalbumin added as a carrier protein. Aliquots of 150 µL were stored at -20°C in Sarstedt sterile tubes.

Determining the optimal concentration of antibodies per test (loading study)

Three concentrations of biotinylated and fluoresceinated anti-bovine transferrin antibodies were tested (20, 40 and 60 ng/test, with equal amounts of biotinylated and fluoresceinated antibodies per concentration tested) with three concentrations of bovine transferrin (0, 1 and 10 ng/mL) to evaluate the background rate and the “slope”. The slope is a measurement of the change of signal as a function of change of antigen concentration. The sandwich format and a sequential incubation protocol were used (see the ILA section of the Threshold System Operator's Manual). Step 2 If necessary, dilute the samples with BSA-free Assay Buffer in polypropylene tubes.

Step 3 Prepare a mixture of the biotinylated and fluoresceinated antibodies, each at a concentration of 40 ng/test (400 ng/mL) in BSA-free Assay Buffer in a single polypropylene tube.

Step 5 Dispense 100 µL of the antibody combination prepared in Step 3 into the tubes using an Eppendorf Repeater Pipetter and a Combitip®.

Step 6 Cover the tubes with Parafilm® and incubate for 2 hours at room temperature.

Step 8 Transfer the reaction mixtures to the filtration units. The filter bases and filter blocks may be either new or re-used (see ILA Detection Kit package insert for cleaning instructions). Filter on low vacuum.

Step 10 When the wells of the filtration units are empty, dispense 2 mL of Wash Buffer in each well, and filter on high vacuum. Turn off the vacuum.

Step 11 Dispense 1 mL of diluted Enzyme Reagent into each well with an Eppendorf Repeater Pipetter and a Combitip and filter on low vacuum.

Step 12 When the wells of the filtration units are empty, dispense 2 mL of Wash Buffer in each well, and filter on high vacuum. Turn off the vacuum and read the sticks.

The lowest calibrator of the standard curve (1 ng/mL) was selected by calculating the concentration of bovine transferrin that would generate a 30 to 50 µV/sec increase in signal over the background signal. This calculation was made based on the results of the loading study (see Sandwich Assay Optimization in the ILA section of the Threshold System Operator's Manual). The other calibrators of the standard curve were distributed over a range of 2 logs (100 fold) above the lowest calibrator. A quadratic equation best fits the data (see Figure 2). 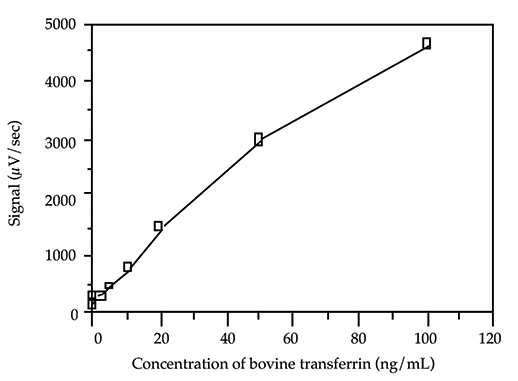 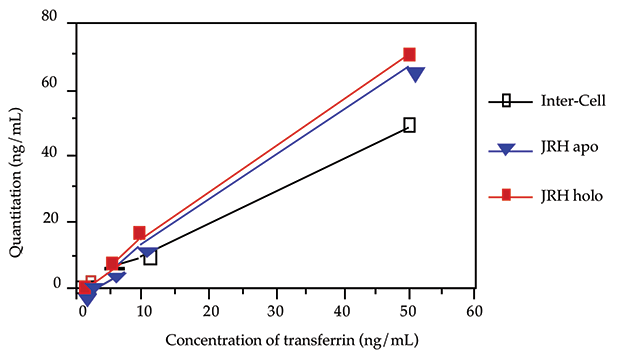 A kinetic study was performed to determine the optimum incubation time. Four concentrations of bovine transferrin (20, 5, 1, and 0 ng/mL) were incubated with labeled antibodies for 4 hours, 2 hours or 1 hour. See the Threshold System Operator's Manual for information on evaluating the limit of detection. This bovine transferrin assay typically allows detection of 1 ng/mL bovine transferrin with a 4 standard deviation separation from the background (data not shown).

The assay performance was evaluated by testing different protein samples for bovine transferrin content. The samples were tested non-spiked and spiked with a known concentration of bovine transferrin, and the percentage spike recovery (SR) was calculated as follows:

Table 4: Results obtained for fetal calf serum solutions using the bovine transferrrin assay protocol.
(*) signal too high to be quantitated off the standard curve. (**) below limit of detection.

The fetal calf serum tested allowed acceptable spike recovery at 5x10-6 and 1x10-6 dilutions, and based on data obtained from those dilutions, contained an average of 4.9 mg/mL of bovine transferrin.

The sample tested allowed satisfactory spike recovery and contained 696 pg contaminant bovine transferrin per mg of murine IgG1, based on averaging the data from diluted and non-diluted samples.

The Murine IgG1 sample (14 mg/mL) was tested in triplicate on 5 different days to study the day to day reproducibility. The repeatability within the same experiment was studied by testing five replicates. The following table lists the results obtained.

Table 6: Reproducibility and repeatability of the bovine transferrrin assay. Each value is the mean of three replicates.

Data in this application note were generated using a 2 hour incubation and 40 ng/test of each labeled anti-bovine transferrin antibody (except as noted). These conditions allow a dynamic range of 2 logs (100 fold), and a detection limit for bovine transferrin of 1 ng/mL. The assay may be adjusted to meet different requirements: the incubation time can be reduced for a faster assay, or increased for a more sensitive assay. Validation of assay performance should be determined for each product tested.