There is an increased need to expand the variety and complexity of cell-based assays for biological research and drug discovery. Live-cell assays allow monitoring of cell responses in real time and provide important insights about compound treatment effects and biological complexity. We used real-time quantitative cell imaging assays with the ImageXpress® Pico Automated Cell Imaging System to monitor complex effects of anti-cancer compounds in cell models.

To characterize the effects of anti-cancer compounds, we monitored the time-dependent effects on cell proliferation and cell cycle for HeLa cervical cancer cells. An environmental control (EC) chamber was used to deliver desired CO2 and O2 concentrations. Time-lapse imaging in transmitted light was used to quantify cell number, confluency, and cell area, while fluorescent markers were used to evaluate the effects of compound treatment on cell cycle.

ImageXpress Pico system is equipped with an environmental control chamber that enables control and monitoring of temperature, CO2 and O2 concentrations, as well as humidity. In combination with time-lapse imaging it provides an efficient tool to perform live experiments, including hypoxia conditions.

HeLa cells (obtained from ATCC) were plated into 384-well black, clear-bottom microplates (Corning, #3603) at a density of 3,000 cells per well and cultured in the environmental control chamber for 24 hours at 37°C and 4% CO2. Treatment with compounds was performed for 24 hours as indicated in Figures 1 through 4. HeLa cells that were stably expressing histone protein mCherry-H2B and Tubulin-GFP were provided by Dr. Málnási-Csizmadia and were cultured and treated similarly to regular HeLa cells.

To visualize cells and to monitor cell proliferation and cell death, images were acquired using a 10X objective with transmitted light every one to two hours for 24 hours. Image analysis was performed during image acquisition using a transmitted light cell count general analysis protocol. The analysis provided measurements for numbers of cells, average cell area, and total cell-covered area.

Phenotypic changes in cell culture were monitored over time by acquiring time-lapse images. Cells were monitored over 24 hours in the EC chamber using transmitted light or fluorescent markers. HeLa cells were plated into 96-well or 384-well microplates at 12,000 or 3,000 cells per well, respectively. Transmitted light images were acquired every one to two hours for 24 hours using a 10X objective, at four sites per well for 96-well plates or one site per well for 384 plates.

Automated image analysis was performed during image acquisition. Image analysis involved finding cells in transmitted light and counting cell number, individual cell area, and area covered by cells (Figure 1). Dead cells were identified based on size and shape and excluded from analysis of healthy cells. Graphing tools were used to view kinetic curves for cell proliferation. Figure 2 shows increase in cell count over a time for each well in a 96-well plate as an indication of proliferation.

Figure 1. Images of HeLa cells acquired with 10X objective by using transmitted light for illumination. The analysis masks for cell count are shown as white overlays (20% of the full image presented). Importantly, the protocol needs to be optimized during the image acquisition, since the analysis protocol cannot be modified or adjusted. Typically, the exposure time is in the range of 1-6 ms, while the focus offset is typically -8.

Figure 2. Cell proliferation and compound effects were monitored in real time over 24 hours. Cells were plated into 96- or 384-wells format and placed into the EC chamber. Transmitted light images were acquired every 1-2 hour using 10X objective, four sites per well for 96 wells, or one site per well for 384 wells. Automated image analysis was performed during acquisition. Note the absence of edge effects when using the IX-Pico EC cassette. 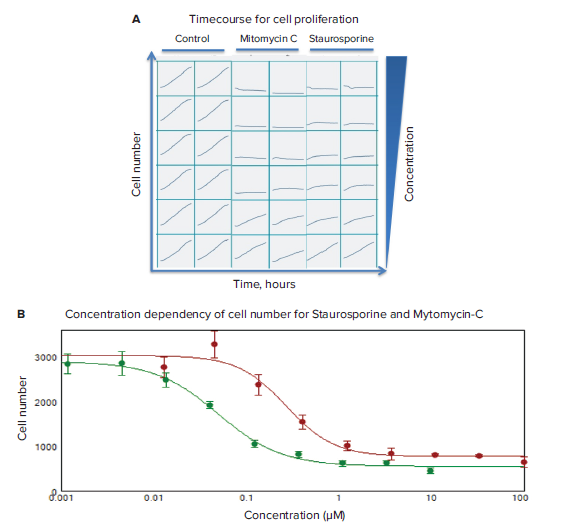 We monitored cell division in HeLa cells that were stably expressing histone protein mCherry-H2B and Tubulin-GFP. By using fluorescently labeled histones and the cytoskeleton protein tubulin it was possible to follow individual cells progressing through the cell cycle. Figure 4 shows five cells, of which each cell divides within 12 hours. The intercellular bridge and also the forming spindle poles are visible (white arrows). Mitotic cells with small and bright nuclei can be identified using image analysis. The total number of cells, and cell spreading, can also be monitored by counting all nuclei (H2B-mCherry) and area of GFP (tubulin) stain (Figure 4B).

Overall, our results demonstrate how environmental control chamber and time-lapse imaging of live cells can be utilized for monitoring cell division and evaluation of compound effects in real time. Image analysis on the fly provides automated monitoring of cell culture and phenotypic changes of cells during the experiment. Finally, time-lapse data can be easily exported into MP4 format and saved as a video.