The ability of mammalian cells to generate mechanical forces—to push, pull, or squeeze—is an intrinsic capability that is used by cells both individually and together as tissue to perform important physiological functions. In order to better understand the mechanisms behind cellular force generation, to identify new drug targets or candidates, and to validate existing candidates thought to affect force generation, quantitative screening approaches to functionally evaluate cellular force must be employed. Importantly, since the functional cellular output drives these disorders, measuring force generation itself, and not a non-specific molecular surrogate such as calcium flux, is critical for maximizing the success of drug development.

This study reports our development of an automated single-cell functional contractility assay called FLECS (Fluorescent Elastomeric Contractible Surfaces) for assessing both the tonic contractility of cells and the ability of test compound to modulate the forces applied by the cells. Primary human airway smooth muscle (HASM) cells obtained from 6 fatally asthmatic and 6 non-asthmatic patients were compared in terms of contractile tone, responsiveness to agonist bradykinin, and finally, bronchodilator, formoterol. Assessment of single-cell contractility for all 12 cell lines was performed using a single FLECS 384-well plate and imaged using the ImageXpress® Micro 4 HighContent Imaging System which is capable of capturing the full area of a 384-well in one image at 4X magnification (Figure 1). Consistent widefield imaging provided by the ImageXpress Micro 4 system enabled time-lapse tracking of greater than 100,000 of contracting single-cells at four minute intervals over long experimental time periods. 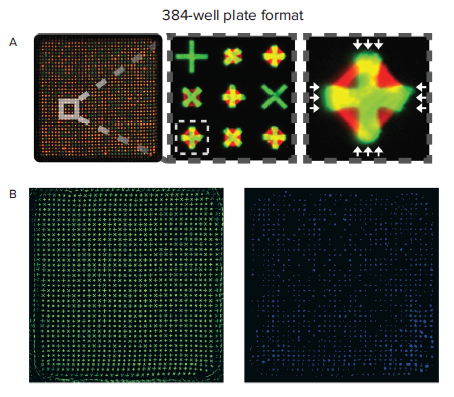 Figure 1. Single wells of a FLECS 384-well plate containing cell bound fluorescent micropatterns. (A) An entire single well of a 384-well plate can be acquired at 4X magnification with the ImageXpress Micro 4 system. (B) Fluorescent micropatterns (green) embedded into an elastomeric base are adhered to and squeezed by single-cells (actin stained in red, nuclei stained in blue), resulting in regular and quantifiable dimensional changes, relative to empty micropatterns, corresponding to the magnitude of the generated force.

FLECS 384-well plates containing arrays of fluorescently labeled extracellular matrix (ECM) micropatterns of defined shapes and sizes covalently embedded into soft base films are seeded with cells to be evaluated. The study evaluated 12 lines of primary HASM cells derived from 12 unique patients, of which 6 were fatally asthmatic and 6 were non-asthmatic, and each pair is age-, gender-, and race-matched.

Figure 2. Illustration of the experiment procedure following seeding of 12 cell lines into the FLECS 384-well plate.

Images were exported from MetaXpress software and processed for contractility data using Forcyte algorithms (Figure 3). Single cells bound to micropatterns were identified based on Hoechst staining. Patterns bound by multiple cells were excluded. For each pattern bound by a single cell, the mean distance between the center and each terminal comprises a data point. 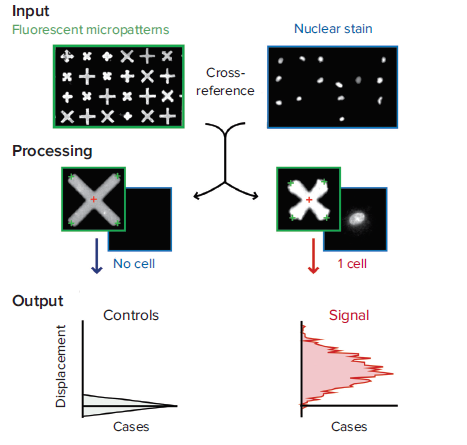 Figure 3. Forcyte algorithm for processing contractility data. The algorithm (i) identified and measured all micropatterns in image set 1, (ii) cross-referenced the positions of each micropattern in image set 2 and (iii) determined whether 0, 1, or >2 nuclei (i.e. cells) were present. The mean center-to-terminal displacements of the micropatterns containing a single nucleus (i.e. 1 cell) were compared to the median of the corresponding measurement of all un-displaced patterns containing 0 nuclei (i.e. un-occupied patterns) and the differences were plotted as a horizontal histogram.

Contractility profiles for diseased vs. normal cells were significantly different

Contractility for each of the ~31,000 agonist-responsive cells (from the 12 cell lines) was tracked over time whereby cells exhibiting increased contraction at 16 min relative to baseline were selected for further analysis (~72% of cells on average). We tracked the evolving contractile distributions for all selected cells (Figure 4A) and found the distributions showed robust upward shifts following treatment with BK that were un-attenuated following addition of vehicle, but were halted or reversed following treatment with formoterol.

Figure 4. Contractility data collected from micropattern images. (A) Population-level histograms of single-cell contractility measurements evolving with time after treatment with pro-contractile agonist bradykinin, and later, bronchodilator formoterol or vehicle control (one patient). (B) Median values derived from population-wide histograms for all 12 patients.

The median contractility value of each cell population was tracked over the course of pharmacological treatment (Figure 4B) and it was observed that for 5 out of 6 pairs of age-, race-, and gender-matched patients with or without fatal asthma, the asthmatic patients’ cells exhibited either greater tone, greater BK-induced contraction, or both. In four of these cases, the differences were statistically significant (Figure 5). 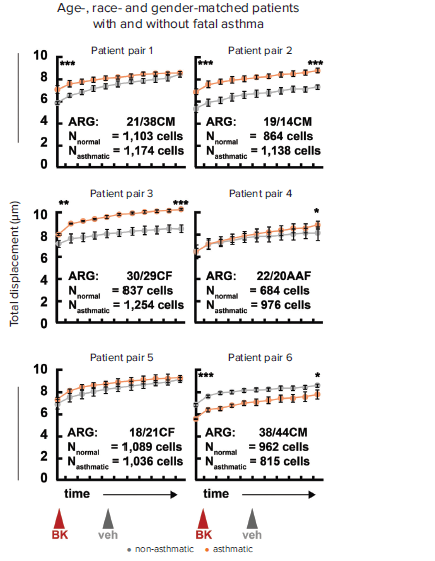 The FLECS well-plate products and the ImageXpress Micro 4 system provides a means to functionally screen large drug libraries for effects on cellular contractility known to be involved in disease processes. Using the FLECS wellplate assays for single-cell contractility, in which vast arrays of precisely shaped adhesive and fluorescent micropatterns are deposited onto elastomeric films on the bottoms of standard microplates, functional force generation can be rapidly evaluated for primary cells or cell lines that adhere to these micropatterns and cause dimensional changes through force generation. The ImageXpress Micro 4 system could rapidly (<10 min per full 384-well plate) acquire entire wells (full 384-well area in one image) with sufficient spatial resolution to observe minute differences in cellular contractility. Rapid, whole well imaging enabled the FLECS technique to be used for highthroughput screening applications and in highly-resolved and multi-dimensional experiments investigating cellular force generation. This study is part of a larger study previously published1.