We have previously described the automated plating, treatment, and analysis of 3D spheroids formed in hanging drop plates (see Automated 3D Cell Culture and Screening by Imaging and Flow Cytometry, AAG-788APP02.15-A). These organoids (Figure 1) have more biologically-relevant levels of cell-cell interactions than monolayer cultures and can better represent the diffusion gradients that would be seen by a solid organ or tumor. Automation provided the fine control necessary to plate consistent hanging drops and avoid aspirating spheroids during media exchanges. We also developed an automated method to dissociate the spheroids for analysis by flow cytometry. 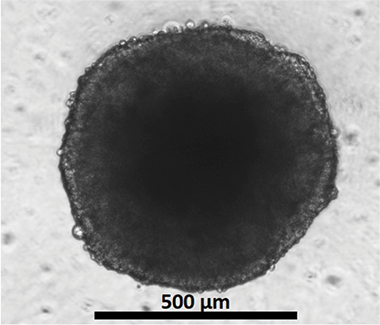 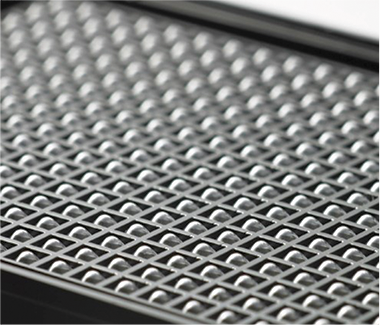 Here we extend these findings to demonstrate how these spheroids can also be formed in ultra-low attachment (ULA) plates that prevent cells from binding to the plastic wells (Figure 1). These plates have some ease-of-use advantages over hanging drop plates, however, automation was still highly valuable for increasing throughput and overcoming plating inconsistencies.

The ULA workflow was automated on the same system as the hanging drop plates, consisting of a Biomek FXP Workstation with a 96-channel head and Span-8 pipettors (Figure 2). The 96-channel head has the enhanced multichannel selective tip pipetting capability, which allows any pattern of tips to be used. The deck flexibility of the Biomek Workstation enables the integration of a variety of storage and analysis instrumentation for higher throughput applications. The Biomek Workstation was also surrounded by a HEPA-filtered enclosure to ensure sterility of the cell cultures during manipulation. 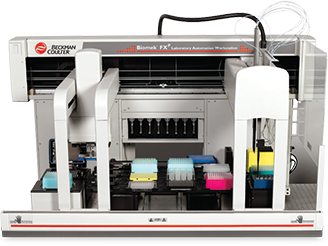 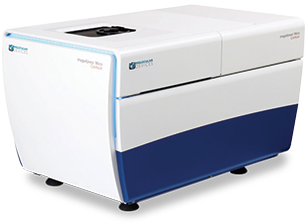 4000 HCT 116 cells were plated per well in either 40 μL or 80 μL FluoroBrite DMEM (Life Technologies) with 10% FBS in 384-well Ultra-Low Attachment Spheroid Microplates (Corning). Spheroids were formed in both volumes and one might select between the two based on reagent cost savings (40 μL) or longer culture times without media exchanges (80 μL). By optimizing pipetting techniques, such as adding a mix step to eliminate air bubbles at the bottom of the well, we were able to achieve spheroid formation in all wells. 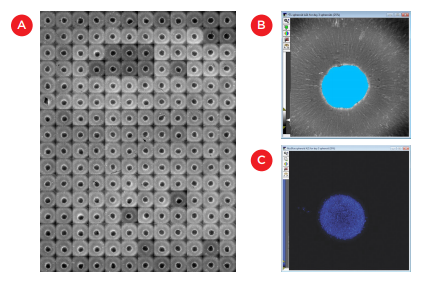 Figure 3. Spheroid size and shape consistency. A) Montage of 192 day 3 spheroids imaged at 10X using brightfield with the ImageXpress Micro Confocal system. B) Spheroids were analyzed for circularity (shape factor, elliptical form factor) and size (perimeter and area) to ensure consistency across well. C) 32 wells were then stained for 24 hours with NucBlue so that cell nuclei could be counted and spheroid volume determined.

Table 1 shows the resulting measurements, with the coefficient of variation (%CV) less than 10% for all measurements and time points. In addition to achieving consistent size and volume, the spheroids gave high measures of circularity as indicated by values approaching 1 for elliptical form factor (ratio of longest to shortest diameter) and shape factor (closeness to perfect circle). The consistency of these measurements are illustrated by the fact that of the 192 wells, only 3 wells had a shape factor below 0.75 when the spheroids formed around a piece of debris in the well.

To demonstrate the utility of these consistent spheroids for drug screening, we used the Biomek Workstation to create serial 1:2 dilutions of various apoptosis inducers. Compounds were diluted in NucBlue and day 3 spheroids were treated (and nuclei stained) for 24 hours. Spheroids were then stained with 1:1000 dilution of the EarlyTox™ Cell Integrity Kit (Molecular Devices) for 6 hours. The EarlyTox™ kit consists of two DNA intercalating dyes, a Live Red Dye that stains the nuclei of all cells and a Dead Green Dye to identify the nuclei of cells with compromised membranes. Automated media removal and compound/stain additions were performed slowly at the top of the liquid level to ensure spheroids were not aspirated from the bottom of the wells. The ImageXpress Micro Confocal system was used with the 60 μm pinhole spinning disk to acquire Z-stack images at 10X magnification with FITC, Cy5, and DAPI filters to quantify live/dead cell staining.

Figure 4A shows the replicate wells treated with the serial dilutions of 5-fluorouracil (Max = 100 uM), camptothecin (Max = 5 uM) and staurosporine (Max = 2.5 uM). A decrease in green staining can be seen in the dilution curves for staurosporine and camptothecin, while less staining is seen in the 5-fluorouracil wells. These results mimic what has been seen previously with these spheroids. The ImageXpress Micro Confocal system allows the enumeration of stained cells and the relative levels of toxicity are plotted in Figure 4B.

Like hanging drop plates, ultra-low attachment plates are another way of generating spheroids for biological studies in three dimensional space. While spheroids can offer more biologically relevant models, both plates require optimization in their use. Hanging drop plates have the risk of possibly losing unstable drops during plate manipulations, but air bubbles can prevent spheroid formation in the ULA plates. Spheroids could be lost from both plates during media exchanges, however the larger volume capacity in the ULA can make this more avoidable when using the plates in a manual fashion. In both instances, we were able to generate consistent spheroids through automation. In ULA plates, the positional accuracy of pipetting enabled the cell addition and mixing to occur low enough in the well to prevent air bubbles while also avoiding contact with the well bottom, which could potentially disrupt the well coating that prevents cell adherence.

By using the ImageXpress Micro Confocal system, we were able to acquire cell-level data for a significant portion of the spheroid, thereby removing the need for spheroid dissociation to accomplish this by flow cytometry. However, spheroid dissociation can still remove concerns regarding stain penetration into spheroids (see previous application note). Not only can there be differential stain penetration based on the health of the spheroid (i.e. untreated controls are more refractory to staining), but some stains can generate cell toxicity upon longer incubation times. While NucBlue showed no significant toxicity effects in this study, 24 hours of exposure to the EarlyTox kit was sufficient to induce toxicity even in the absence of apoptosis inducers.

To utilize ULA plates for screening campaigns, one must be able to achieve consistent spheroid formation, treatment, and analysis at high throughput. Automating the workflow on the Biomek Workstation achieved this consistency with minimal bench time and integration of analyzers such as the ImageXpress Micro Confocal system can further enable screen-level throughputs for three-dimensional cellular applications.