Luminescent cell viability assays offer sensitivity and an easy workflow for monitoring the effects of various experimental conditions. These use the firefly luciferase reaction as a way to determine the relative numbers of living cells under different treatments or experimental conditions. Metabolically active cells produce ATP, which is required by the luciferase reaction. When ATP is the limiting component in the reaction, the amount of light produced is proportional to and serves as the readout for the number of viable cells (Figure 1).

Figure 1. Luciferase reaction used to measure cell viability. Cells are lysed and added to the luciferase reaction, where they provide the ATP needed to produce light. The more live cells are present, the more light is produced.

Here, we validated performance of Promega’s CellTiter-Glo 2.0 Cell Viability Assay1 on the SpectraMax® iD5 Multi-Mode Microplate Reader. Both ATP and viable cells were used to generate standard curves demonstrating the sensitivity and linearity of the assay.

A 1:10 serial dilution of ATP was prepared in medium. 100-μL samples ranging from 1 nM to 10 μM were added to triplicate wells of a solid white 96-well microplate. Controls containing medium only were included to measure background luminescence. 100 μL of CellTiter-Glo 2.0 reagent was added to each well, and the microplate was placed on a plate shaker for two minutes, then incubated at room temperature for 10 minutes. Luminescence was then detected on the SpectraMax iD5 reader using the settings shown in Table 1.

Table 1. Instrument settings for luminescence readings on the SpectraMax iD5 reader. The All Wavelengths setting (no wavelength selection) was chosen to maximize the luminescence detected by the reader. Read height was optimized using the Read Height Adjustment setting in SoftMax Pro Software.

MCF7 cells were seeded from 20 to 20,000 cells per well in a solid, white, 96-well microplate. Background control wells contained medium only. Cells and controls were run in duplicate at 100 μL per well. Cells were allowed to adhere to the wells for three hours at 37°C, 5% CO2. The microplate was equilibrated to room temperature for 30 minutes, and 100 μL of CellTiter-Glo 2.0 reagent was added to each well. The plate was placed on a plate shaker for two minutes to induce lysis and allowed to incubate at room temperature for 10 minutes before luminescence was measured on the SpectraMax iD5 reader.

MCF7 cells were seeded at 15,000 cells per well in a solid, white, 96-well, tissue culture-treated microplate and allowed to attach overnight at 37°C, 5% CO2. Control wells containing medium without cells were included to determine background luminescence. The next day, a 1:2 serial dilution of tamoxifen ranging from 0.2 μM to 100 μM was added to the cells. Cells were incubated for 48 hours. The microplate was equilibrated to room temperature for 30 minutes prior to the addition of 100 μL of CellTiter-Glo 2.0 per well. The plate was shaken for two minutes to induce cell lysis and incubated at room temperature for 10 minutes to stabilize the luminescent signal before reading. The ATP content of cells can be calculated using the ATP standard curve in a preconfigured CellTiter-Glo protocol in SoftMax® Pro Software.

The CellTiter-Glo 2.0 assay was used to generate an ATP standard curve, which can be used to determine the amount of ATP present in a cell sample. When detected using the SpectraMax iD5 reader, this curve was linear over concentrations of ATP spanning four orders of magnitude (Figure 2). 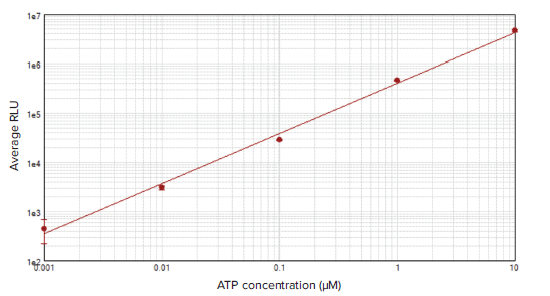 A standard curve consisting of MCF7 cells seeded from 20 to 20,000 per well in a 96-well plate was linear across the entire range with r2 = 0.993 (Figure 3), validating the assay’s usefulness over a wide range of viable cell numbers. MCF7 cells treated with tamoxifen for 48 hours were assayed for cytotoxicity, and the resulting concentration response curve was plotted using a 4-parameter curve fit in SoftMax Pro Software (Figure 4). From the curve, an IC50 value of 19.7 μM was automatically calculated by the software. This result is consistent with other published results in MCF72. 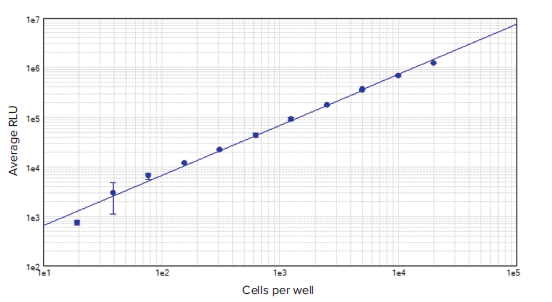 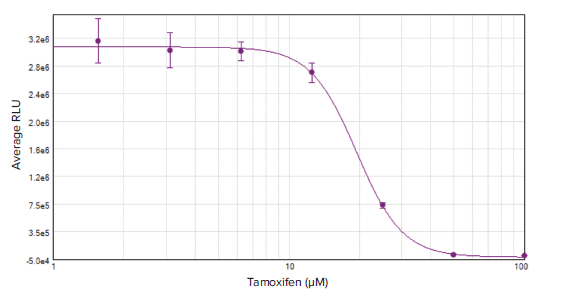 Screening of cell viability in response to experimental treatment is most easily done using an assay that is homogeneous and stable. The CellTiter-Glo 2.0 assay consists of a single reagent that is added directly to cells cultured in a microplate and is stable at a variety of storage conditions. The signal half-life is greater than three hours, making the assay amenable to a variety of screening and other workflows.

Used together with the SpectraMax iD5 reader, which features an ultra-cooled PMT for improved luminescence signal to noise, this assay enables linear detection of a wide range of cell numbers, down to 20 cells per well. The SpectraMax iD5 reader also offers the capability of multiplexing the CellTiter-Glo assay with other assays requiring additional detection modes.