Tetrazolium salts such as MTT have long been employed in colorimetric assays to assess cellular metabolic activity. Viable cells produce enzymes that convert yellow MTT (3-(4,5- dimethylthiazol-2-yl)- 2,5-diphenyltetrazolium bromide) to insoluble purple formazan. The more viable cells present in a sample, the more intense the purple color. The formazan is solubilized via addition of a second reagent, and then the samples’ absorbance is measured at 590 nm in a microplate reader, providing a convenient readout for cell viability or proliferation.

Although easy to run, the MTT assay does require two reagent addition and incubation steps, reducing its appeal when time is limited or samples are numerous. Here we compare an MTT assay from Abcam to the colorimetric Cell Cytotoxicity Assay, also from Abcam, that uses a proprietary water-soluble dye whose absorption spectrum changes upon cellular reduction. In this assay, a single reagent is added to cells, and after incubation, absorbance is measured at 570 nm and 675 nm. The absorbance ratio (OD570/OD675) is proportional to the number of viable cells in the sample.

The MTT and the Cell Cytotoxicity kits can both be used to measure cell proliferation (viable cells) and cytotoxicity. The choice will be based mainly on the desired workflow and time required. Detection of a range of viable cell numbers was performed by plating a dilution series of HeLa cells in 96-well plates and assaying with both kits. Cytotoxicity was measured by using both kits to assay HeLa cells treated with doxorubicin, a chemotherapy drug that stops or slows the growth of cancer cells by inhibiting the enzyme topoisomerase 2. Both the MTT and Cell Cytotoxicity assays were read on the SpectraMax® ABS Plus Microplate Reader, which can read a 96-well microplate in less than 10 seconds. Up to 70% savings in overall assay time can be gained when using the Cell Cytotoxicity assay (Figure 1).

Kits and other materials used

Cell plating and treatment prior to assay

To validate the assays’ ability to detect a wide range of viable cell numbers, a series of cell densities was set up. HeLa cells were plated at 156 to 10,000 cells per well in triplicate in 96-well microplates with a clear bottom and black walls. Control wells containing medium only (no cells) were included for use in data analysis. Cells were allowed to attach and grow overnight at 37°C, 5% CO2.

Both kits were used to assay the viable cell density series, as well as cytotoxicity in doxorubicin-treated cells.

20 μL of Component A was added to each well of the microplate. The plate was placed on an shaker for 15 seconds and then incubated for 2 hours at 37°C, 5% CO2. Absorbance (optical density, OD) was read at 570 nm and 605 nm on the SpectraMax ABS Plus Microplate Reader. For each sample, absorbance values were expressed as the OD570/OD605 ratio.

For the MTT assay, samples of varying cell densities were background corrected by subtracting the absorbance values of the no-cell control (background) from those of the cell-containing wells. Results were plotted as absorbance values versus cells per well.

The effect of doxorubicin treatment on cells was calculated using the following equation:

Where Control is the absorbance value of untreated cells.

For the Cell Cytotoxicity assay, proliferation (cell density series) was analyzed by subtracting the average absorbance value (ratio) of the no-cell control from values of the cell wells. Cytotoxicity results for doxorubicin-treated cells were calculated using the same equation as was used with the MTT assay:

All calculations were set up using the template editor and group tables, and results were plotted using the best curve fit, in SoftMax® Pro Software.

Cell dilution series data were plotted as background-corrected absorbance values vs. cells per well (Figure 2). Both assays can readily measure cell densities from 10,000 to as few as 156 cells per well in a 96-well plate. 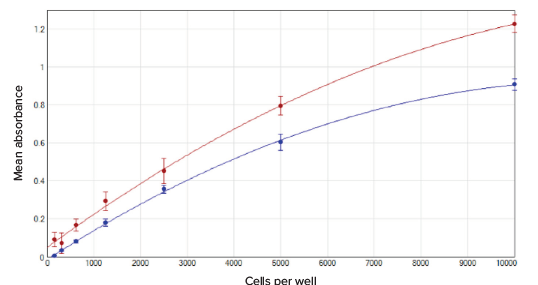 The % cytotoxicity values for doxorubicintreated cells were plotted versus doxorubicin concentration (Figure 3). The MTT assay yielded an IC50 value of 3.1 μM, and the Cell Cytotoxicity assay gave a similar value of 2.1 μM. 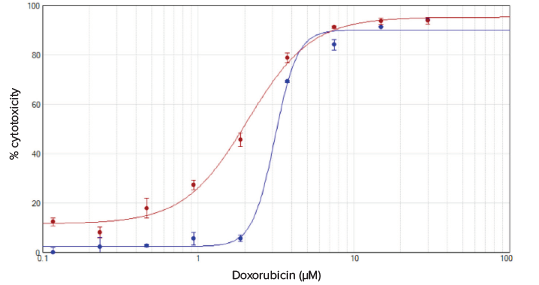 Both the MTT Cell Proliferation assay and the Cell Cytotoxicity assay were used to (a) assess viability over a wide range of cell densities and (b) measure cytotoxicity in cells treated with doxorubicin. Each assay gives similar results, but the Cell Cytotoxicity assay offers the advantage of time savings due to its single-reagent format and reduced incubation time. Both assays enable labs to screen compound effects using absorbance-based detection available with the SpectraMax ABS Plus Microplate Reader, with results calculated and plotted in SoftMax Pro Software.