The endogenous expression of GPCRs in mammalian cells is typically very low, generally with no more than 3,000 copies per cell. These endogenous expression levels are sufficient to maintain proper receptor function but present a challenge with respect to GPCR drug discovery efforts. Most screening assays require a much higher concentration of functional GPCRs presented on the cell surface. For example, structural studies, small molecule drug design and generation of functional antibodies against native GPCR targets require expression levels that are orders of magnitude higher than endogenous levels. Attempts to create expression systems in “lower” organisms have met with limited success due to inefficient folding (bacteria), low yield (yeast), or incorrect post-translation modification (baculovirus). These challenges fuel the market need for mammalian expression systems capable of providing the elevated GPCR protein expression levels required to support drug discovery efforts.

Discovery and selection of high expressing GPCR clones from a transfected pool of cells can be challenging with regards to cell-line development. The technology in ClonePix 2 Systems represents a proven, one-step method of screening large heterogeneous cell populations rapidly (10,000 clones in 3 weeks) increasing the probability of finding optimal producers due to the significantly larger pool of cells that can be analyzed. Utilizing both white light and fluorescent images in situ, the ClonePix 2 System has the sensitivity to detect endogenous levels of protein limited to cell surface expression.

Plating of cells in semi-solid medium

Direct labeled approach: An antibody against the Muscarinic 1 Receptor (CHRM1) labeled with PE was added directly to the semi-solid medium along with the cells. Control wells containing cells without antibody were also plated.

CHO-M1 positive cells produced a range of fluorescent signals as recorded on the ClonePix 2 System with both the direct labeled antibody and the dualantibody approach. This corresponds to various levels of expression of the M1 GPCR (Figure 1). As expected, the parental line CHO-K1 did not produce a fluorescent signal.

Figure 1. Detection of CHO-M1 cells on ClonePix 2 System. The ClonePix 2 System reveals diverse levels of fluorescent intensity with CHO-M1 cell line, demonstrating it can distinguish between various levels of expression of GPCR M1 protein. Colonies recognized by the software are outlined in color under the brightfield channel. Fluorescence intensity is calculated based on the physical location of colonies.

Cells were grouped to identify and separate colonies based on morphology and fluorescent intensity. Acceptable morphology for picked colonies was based on size, shape, and proximity to neighboring colonies. Morphologically ideal colonies were ranked by interior fluorescent intensity and gated into one of four fluorescent groups: High, Medium, CHO-K1 neg, and Ungated (Figure 2). The CHO-K1 neg group was defined by intensity of background signal. All colonies identified in the group were confirmed to originate from the corresponding negative control well. Ungated colonies refer to colonies that had low levels of signal but above the background.

Figure 2. Fluorescent ranking of CHO-M1 expression. Clones were ranked, then grouped based on morphology and interior mean fluorescence intensity

Both the direct labeled antibody and the dual-antibody approach (Figure 3) demonstrated fluorescent signal in positive samples (expressing M1), and lack of signal in the parental cell line (Figure 4). As expected, the dual-label approach produced more background signal in the PE channel due to primary and secondary antibody binding in the background. However, the ClonePix 2 System detects colonies in brightfield, then looks for fluorescent signal within the colony. Objects recognized in the PE channel but not in brightfield are not considered colonies; thus, the ClonePix 2 System provides the benefit of the ability to discriminate true colonies from the background signal. 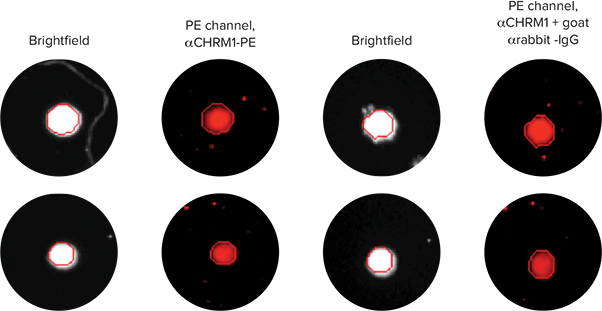 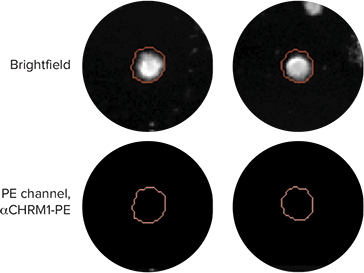 Colonies picked by the ClonePix 2 System were deposited into 96-well plates containing 200 µL Ham’s F12 media + 10% FBS + G418 for CHO-M1 picked clones and the same media conditions without G418 for CHO-K1 clones. These 96-well plates were imaged on the CloneSelect Imager to verify transfer and growth (Figure 5). Cells were cultured for one week then analyzed on the CloneSelect Imager to ensure the cells had proliferated (Figures 5 and 6). Cells were subsequently transferred to 384-well plates for functional verification of expression by the FLIPR Tetra System using the FLIPR Calcium 6 assay. 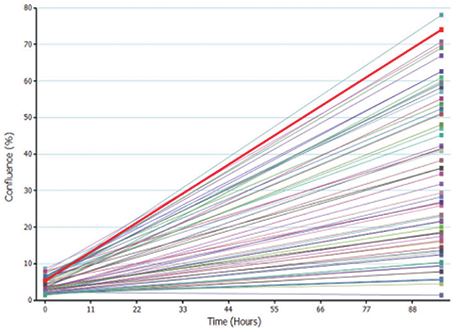 Cells selected by the ClonePix 2 System were plated on a 384-well plate overnight at 5,000 cells per 25 µL of growth medium per well and incubated at 37°C in 95% humidity and 5% CO2. These cells were sorted into four groups: high, medium, low, and no M1 expression based on the ClonePix System technology.

Cell plates were removed from the incubator and equilibrated to room temperature before dye loading. 25 µL of FLIPR Calcium 6 Dye was added to cell plates without removing the culture media. These plates were incubated for two hours at 37°C in 2.5 mM probenecid to block organic anion transporter and then kept at room temperature until fluorescent read.

After incubation and equilibration to room temperature, one plate was placed on the plate reader platform of the FLIPR Tetra System. Fluorescent calcium signal was captured by an ICCD camera with the following parameters:

Membrane bound G protein-coupled muscarinic receptor expression level was evaluated using anti-M1 antibody conjugated with PE from a newer and older passage of CHO-M1 cells. The expectation is that with the older passage the expression level of M1 GPCR will be significantly lower than the newer passage. Parental CHO-K1 cells were also included in the study as negative control.

Upon activation of GPCRs by ligands, receptor conformation is changed triggering G-protein activation inside the cell. An active G-protein has the potential to induce various cascades of intracellular messengers including calcium.

Cells from each group picked by the ClonePix 2 System were evaluated for functional activity using the FLIPR Tetra System. Calcium-sensitive fluorescent dye (FLIPR Calcium 6 Assay Kit) was used to assess changes in cytoplasmic calcium via activation of G-protein coupled IP3 sensitive pathway by carbachol at 40 nM throughout this feasibility study. Carbachol at 40 nM is the EC80 concentration based on historic agonist concentration response curves, determined empirically. 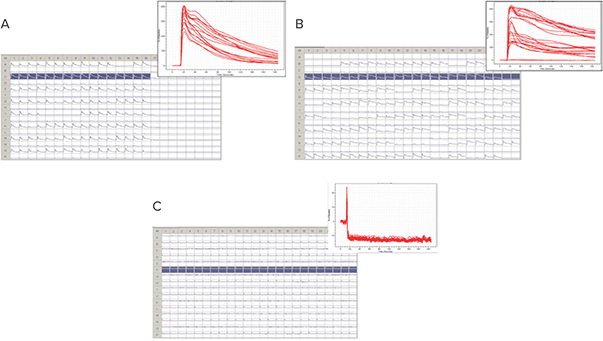 Figure 7. Analysis on FLIPR Tetra System. The FLIPR Tetra System performs high-throughput, functional cell-based assays and is the system of choice in drug discovery for evaluating changes in intracellular calcium detected through the use of fluorescent calcium-sensitive reporter dyes (FLIPR Calcium 6 Assay Kit). The results are depicted here: (A) CHO-M1 high, (B) medium to low M1 fluorescence, and (C) CHO-K1 negative control.

These results support a positive correlation between membrane bound G-protein coupled muscarinic receptor expression level and functional activity. The lack of calcium fluorescent signal in CHO-K1 negative control group further confirms that the ClonePix 2 System can accurately distinguish between clones with and without expression of the M1 GPCR on the cell surface.

To meet the demands of high-throughput screening and selectivity profiling, GPCR transfected cell lines are a unique, robust, and uniform platform for cell-based functional assays. In conclusion, these preliminary studies revealed that the ClonePix 2 System can reliably detect variable expression of GPCR clones. Moreover, fluorescence intensity correlates positively with the magnitude of GPCRmediated changes in cytoplasmic calcium levels as measured by the FLIPR Tetra instrument, caused by differences in the expression of membrane bound G-protein coupled muscarinic receptor M1.

The ClonePix 2 System can thus be efficiently used to detect and pick respective GPCR expressing clones and provide as a unique source of high quality GPCR proteins for variety of applications, including antibody generation using antigens with natural epitopes at high expression level and cell-based functional assays for hard-to-express GPCRs from structurally distinctive GPCR families.