As regulations for cell line development become increasingly more stringent, researchers will be required to perform single-cell cloning and provide evidence that a cell line is derived from a single cell (proof of clonality).

One accepted method for establishing clonality is limiting dilution (LD), a probability-based process whereby only a small subset of the wells (10–30%) in a plate is likely to contain a single cell. Cell sorting by flow cytometry (FC), another traditional cloning method, can dispense a single cell in each well of a plate with higher efficiency, but high fluidics pressure during sorting may have non-negligible effects on post-sort cell viability1–2. Furthermore, the high costs associated with instrument maintenance and trainings creates barriers to users who have limited access to resources. Cost-effective cell line development workflows and highly efficient cloning methods are needed. The CloneSelect™ Single-Cell Printer™ f.sight™ (f.sight) is designed to meet this need, gently depositing a single cell into a well with the entire cell deposition process imaged and time-stamped, providing pictorial evidence of monoclonality and excellent post-deposit cell growth for cell line development.

In this study, we conducted six sets of experiments, cloning two CHO cell lines with animal-component-free (ACF) cell culture media and supplements, and compared the performance of f. sight versus two other accepted cloning methods (FC and LD).

For each cell line tested, the components of cloning medium and workflow for sample preparation were identical. The cloning medium was freshly made from EX-CELL® CHO cloning medium (C6366, Sigma SAFC) supplemented with 4mM L-glutamine and 2.5% ClonaCell™-CHO ACF supplement (3820, STEMCELL). Prior to cloning, cells were adapted for 48 hours in cloning medium at a seeding density of 0.35x106 viable cells/ml to reach log phase. On the day of cloning, 10 million cells were harvested and stained with 1 µM CAM (R8343A, Molecular Devices) at 37°C for 15 minutes. After staining, cells were washed twice with plain media, suspended in plain cloning medium, filtered through a 30 µM cell strainer, adjusted to the density of 1x106 viable cells/mL, then split into three separate tubes to be applied to the three cloning methods described below.

Plates were prefilled with complete cloning medium (200 µL/well). 60 µL of single-cell suspensions with the density of 1x106 viable cells/mL was loaded into a disposable sterile cell cartridge. The cell cartridge was loaded onto the CloneSelect Single-Cell Printer f. sight and cells were deposited at a density of one cell per well into five standard 96-well plates (Corning 3300) based on user-defined parameters including cell size, roundness, and fluorescent intensity.

Stained cells ready to be dispensed were transferred along with the prefilled plates (200 µL/well) to a BD FACS Aria™ Fusion sorter. Unstained cells with no/low fluorescence were used as a baseline reference for fluorescence cell sorting. Cells were passed through a nozzle (85 µM, sheath pressure 45 psi), sorted based on cell fluorescence intensity, and dispensed at a density of one cell per well into five 96-well plates.

Stained cells with a density of 1x106 viable cells/mL were diluted 1:1000 (1x103 viable cells/mL) to target a seeding density of 0.33 viable cells/well. A total of 165 viable cells (165 µL) were taken from the 1:1000 dilution and added into a media bottle containing 100 mL of complete cloning medium. Cells were mixed by gentle swirling the bottle and transferred into five standard 96-well plates with 200 µL per well.

All seeded plates were centrifuged at 200 g for three minutes prior to imaging in order to force cells to settle to the bottom of the plate. Plates were imaged on the CloneSelect™ Imager (CSI) system (with transmitted light only) on day 0, 1, 2, 7, and 14 to track cell growth and confirm clonality from seeding to cell expansion.

Single-cell counts and colony counts were assessed based on manual review of cell images. Cell confluency was automatically calculated on a per well basis using CSI software (Figure 1). The criteria used to determine counts was consistently applied across all six sets of experiments. All single-cell events were further verified by examining cell growth on day 1, day 2, or day 7 post-deposition. Wells containing single-cell like particles or non-viable cells were counted as void wells. If a single-cell was deposited on the edge of the well, making it difficult to confirm clonality, then the well was excluded from the study. The single cell deposition efficiency was calculated as the counts of wells containing single-cell on day 0 divided by total eligible wells (i.e. remaining wells not excluded using criteria described above). Outgrowth efficiency was calculated by dividing the number of wells containing a single-cell derived colony (with more than twenty cells clustered together) on day 14 with the total number of eligible wells. 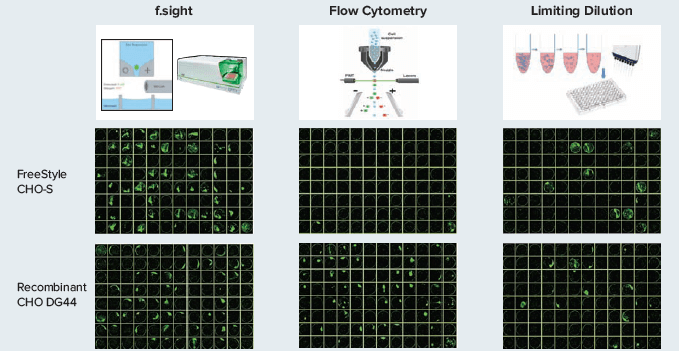 Figure 1. The plate images above showed the cell growth 14 day after single-cell deposition. The green pseudo coloring are from the segmentation of colonies imaged in brightfield on CSI.

As shown in Table 1, the single cell and outgrowth efficiency varies greatly among cell lines and the cloning method employed.

In general, the average single-cell (deposition) efficiency via FC is about 10–20% lower than that of f.sight for both cell lines (64.3% ±2.8% vs. 82.4% ±3.0%, respectively for FreeStyle CHO-S; 66.5% ±4.1% vs. 86.3 ±3.0%, respectively for recombinant CHO DG44) (Figure 2A). It is unlikely that this decreased efficiency is an artifact of the lower viability observed post-deposit using FC, which could lead to a possible underestimation of single-cell counts, since CHO DG44 cells showed similar viability in all experiments. As expected, LD method yielded the lowest single cell efficiency among three cloning methods tested (13.2% ±2.2% for FreeStyle CHO-S, 13.1% ±1.3% for recombinant CHO DG44).

The CloneSelect Single-Cell Printer f.sight outperformed both limiting dilution and cell sorting by flow cytometry with respect to clonal outgrowth efficiency for each cell type tested.

LD cloning yielded comparable single cell clones in both cell types, but the overall clonal cells that can be used for further characterization are only about 10% of the cells seeded into the plates.

The FC method yielded almost no clonal outgrowth during the two weeks of incubation time from seed to expansion on FreeStyle CHO-S cells, however, it yielded comparable outgrowth percentage to that of f.sight on recombinant CHO DG44 cells. Since both cell lines were treated in the same way side-by-side throughout the entire experiment period, this large outgrowth variance between cell lines is most likely associated with the high fluidic pressure (45 psi) during the FC dispensing process and impacted by the variances of sensitivity of individual cell lines to high fluidic pressure2.

The f.sight improves upon traditional methods of cloning by providing a gentle and efficient cell sorting method for cell line development. This approach is particularly valuable for single-cell isolation of sensitive cell lines with inherently low tolerance to high fluidic pressure, which often leads to poor cell growth after fluorescence cell sorting.